From Japan with Style – as featured in ‘Belgravia Residents Journal’, January 2013

If you keep following Pont Street westwards out of Belgravia proper, it isn’t long before you waft into Beauchamp Place, where you can find a Japanese ‘clubby’ bar-restaurant, known for a moderate celebrity following.

It was Thursday night and NOZOMI was warming up come 8pm. I found a spot in the front-facing bar besides the window, where I could sip a pre-supper Pear Bellini whilst waiting for my friend. Tired and hungry, I made the bold move of converting my request for a bowl of nuts into one for calamari, duck spring rolls and snap peas. Easily done here, apparently.  Despite a pang of guilt at the size of the pre-starter concoctions, I did not ultimately regret matters for the proved to be some of the best food choices of the evening to come. I was pretty much told it would be sacrilege not to add fois gras to my line-up (for the eating of which I thankfully had company). Top quality; a true melting indulgence.

After trotting up a couple of steps to the neutrally decorated and sleek back-facing restaurant, my friend and I ordered wagyu beef tartar, Japanese mushrooms sautéed with sweet soy, dumplings with edame beans, seaweed salad and lamb – all to share. The fine slices of wagyu were faultless and the dumplings beautifully presented. The lamb was also a tasty triumph and we considered ordering more meat as we strayed from our seaweed and mushroom plates. We tried two different red wines between us and concurred that by far superior was the absolutely excellent Amarone Della Valpolicella (Corte Aleardi, Italy 2004-5). Its on the low to mid-end of the wine list which will nod you in the direction of a £4,000 a bottle if you want it to.

When the food in any way flags (we weren’t too sure about the deep fried crème bruleé boules probably just because they departed too much from our concept of how bruleé should be) the waiters are the saving grace. A delightful bunch hailing largely from Columbia and France, they were very efficient, totally on the ball and had time to converse with heart. The ‘Valrhona chocolate fondant with vanilla ice cream’ was spot-on the warm-chocolate oozing bomb it should be.

NOZOMI doesn’t just want to be a restaurant, but an experience-driven eaterir of the highest calibre. The place is dotted with relaxed-looking regulars. This would be a good place to seal a business deal; there seems to be a natural pathway leading from bar up to the restaurant and then down the other side into the pulsating bigger bar (not strictly a club but with a dedicated live DJ). You have to pass alongside this to go to the toilet and straight through it to go home. Its hard not to get in the mood for at least one for the road, if not a merry boogie. It wouldn’t be a good place to take your parents unless they happen to have a penchant for the ever-escalating music beat, because these feed through to the speaker-heavy restaurant with some sonority come about 9pm.

This year saw NOZOMI launch its first overseas branch at Monte Carlo’s Port Palace Hotel, where I can imagine it would fit in well. A seasonal set-up, you now wont be able to find it open until spring 2013. The launch was in collaboration iwht Geoffrey and Cristian Moore, children of Sir Roger and owners of world-renowned Hush restaurants. NOZOMI has plans to make itself known in Beirut, Lebanon, Riyadh, Saudia Arabia (a fair cross-section of the Thursday-night diners looked like they could hail from such climes). But nest news for Belgravians is the take-away service already in full flow at the flagship branch which covers all of SW1. Wagyu to you door? Its got to be done, surely.” 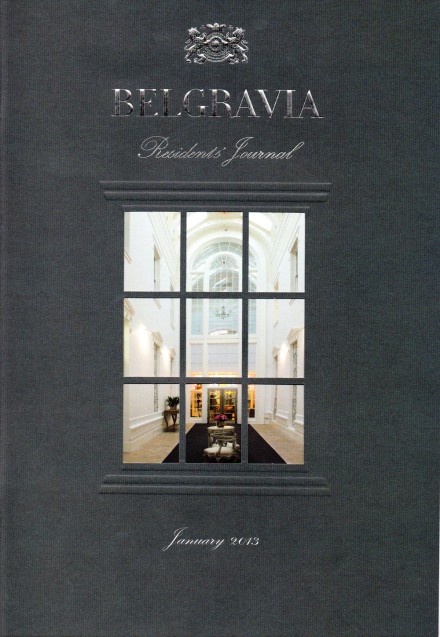 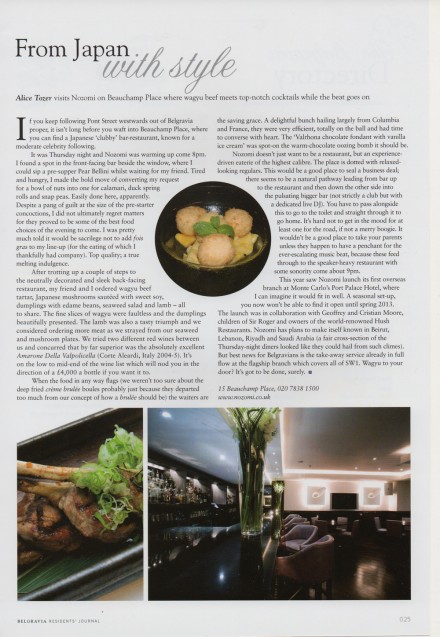